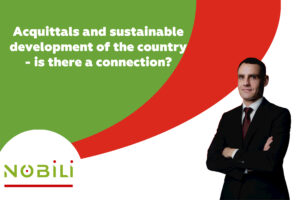 Acquittals and sustainable development of the country – is there a connection?

In our country, the percentage of acquittals is less than 1 percent. For comparison, in developed countries – Europe and the United States acquit almost a third of the defendants, in the UK, this percentage reaches 40%. Therefore, conclusions about the current state of justice in criminal cases are on the surface. Especially against the background of the events related to the adoption on October 27, 2020 by the Constitutional Court of Ukraine of an odious and highly dubious decision on the unconstitutionality of Article 366-1 of the Criminal Code of Ukraine.

One of the important reasons for such sad statistics lies in the judges. Because they are the ones who acquit, and like most people, they are guided by habits and their own experience. And for most of their time as judges, acquittals have been a major challenge. And first of all directly for the judge, as a legacy of the post-Soviet judicial system of the totalitarian state.

Precisely because the acquittal is an extraordinary event for the prosecutor’s office and the police (formerly the police). Tombstone in their statistics. That is why the chief of police and the district prosecutor reacted immediately to the threat of acquittal. And with all the truths, and more often than not, they tried to influence the judge. If only there was no acquittal. But this cannot be the norm for a democratic society.

It is not possible to ensure the inevitability of punishment in 100 percent. And not just because of mistakes or negligence of law enforcement agencies. Some crimes are indeed carefully prepared or, as a result of coincidence, are objectively extremely difficult to detect and to prove the guilt of criminals and bring them to justice. But at the same time, a democratic society declares a more important postulate – the presumption of innocence. Which is that any person suspected of committing a crime is innocent until proven guilty in accordance with the law and established by a court verdict that has entered into force.

The principle of presumption of innocence is enshrined in the provisions of Part 1 of Article 11 of the Universal Declaration of Human Rights: “Everyone charged with a criminal offense has the right to be presumed innocent until proved guilty according to law opportunities for protection “.

The presumption of innocence is enshrined in the International Covenant on Civil and Political Rights, in particular in paragraph 2 of Article 14: “Everyone charged with a criminal offense has the right to be presumed innocent until proved guilty according to law.”

Article 6 § 2 of the Convention for the Protection of Human Rights and Fundamental Freedoms: “Everyone charged with a criminal offense shall be presumed innocent until proved guilty according to law.”

And all these rules of law are intended to ensure human rights and to justify it under appropriate conditions. Moreover, there is another goal – to save the state from riots and uprisings against oppression.

As stated in the Preamble to the Universal Declaration of Human Rights: “Human rights must have sound legal protection (” guaranteed by law “) so that” man is not forced to resort to rebellion as a last resort against tyranny and oppression. ”

The right to make mistakes is an integral part of almost all activities in which people participate. And such activity as law enforcement – ensuring the implementation of the Criminal Code, is no exception. Because on the scales is not only the fate of one accused person, but sometimes the fate of the state as a whole.

Yes, judges are part of society. And their principled position and ability to defend their own decisions is an indicator of the health of the country, society. If this does not happen – it leads to an uprising of people – prosecution during the Revolution of Dignity on the basis of “Laws of January 16” – Yanukovych’s dictatorial laws, Vradiyiv tragedy, Kagarlyk events, “justice” which is now taking place in Belarus as a massacre of citizens, and against citizens throughout Belarus, other examples confirm this.

Therefore, it is important to respect and ensure the human right to sound legal protection, the presumption of innocence and, as a consequence, a high percentage of acquittals. This is an indicator of the development of the state and society. But it is because of human rights, not because of inaction or outright sabotage by law enforcement. Both judges and law enforcement officers mostly agree with this, some of them true only when they themselves face the work of the system in a different status – suspect or accused.