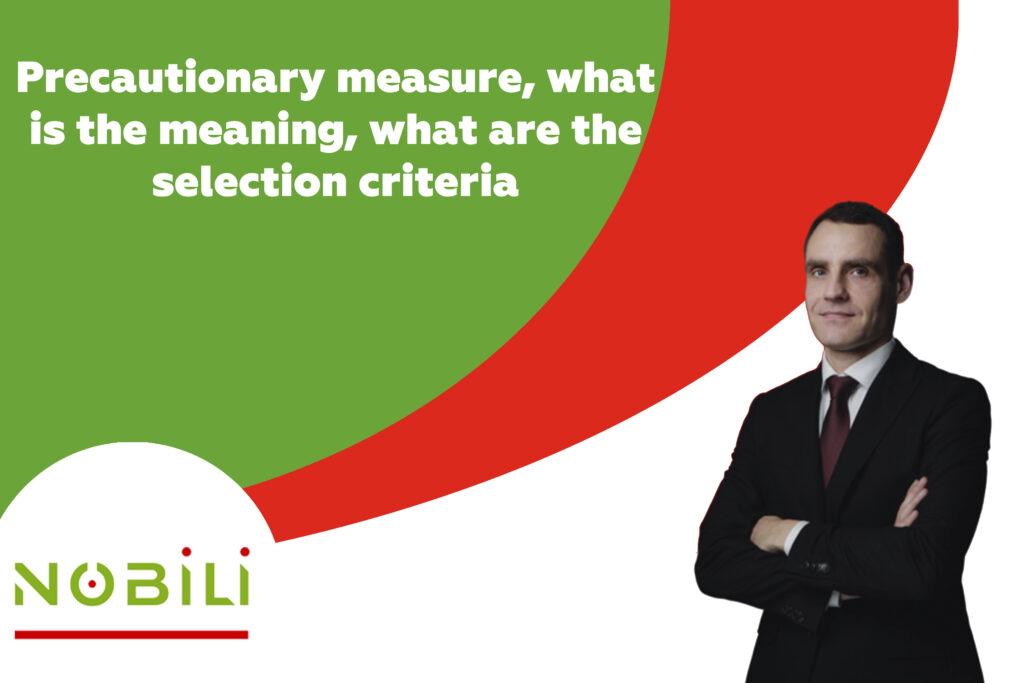 Preventive measure, what is the point, what are the criteria for election.

Precautions are measures of procedural coercion that restrict constitutional human rights – personal freedom and freedom of movement of the suspect (accused) and are used to prevent the possibility of hiding from the investigation and the court, to prevent the establishment of objective truth and justice, and to continue criminal activity. The preventive measure may change either during the pre-trial investigation or in the judicial review of the case in the manner prescribed by law.

Purely procedural – the application of any restraint is carried out by the investigating judge on the basis of the request of the investigator, which is previously agreed by the prosecutor.

One of the most important duties of a court when choosing a measure of restraint is to assess in the aggregate of all circumstances, for the sake of choosing the appropriate preventive measure.

When deciding on the choice of a preventive measure, in addition to the risks mentioned above, the investigating judge, the court, on the basis of the materials provided by the parties to the criminal proceedings, must evaluate all the circumstances in total:

1) the weight of the available evidence of a criminal suspect or accused;

2) the severity of the punishment threatens the person concerned if the suspect is accused of a criminal offense of which he is suspected of being convicted;

3) the age and state of health of the suspect, the accused;

4) the strength of the social ties of the suspect, the accused in the place of his permanent residence, including the presence of his family and dependents;

5) the suspect, accused has a permanent place of work or study;

6) the reputation of the suspect, the accused;

7) the property status of the suspect, the accused;

8) the existence of a criminal record of the suspect, the accused;

9) compliance by the suspect, the accused with the conditions of the measures applied, if they were applied to him earlier;

10) the presence of a message to a person about suspicion of another criminal offense;

12) the risk of the continuation or repetition of unlawful behavior, including the risk of mortality, that it is created by the suspect, the accused, including in connection with his access to weapons.

But on the basis of practice – clear criteria for the court, for the sake of determining in what cases one or another preventive measure should be applied – no. Most often, a large social resonance is effectively triggered, coverage of the events and circumstances of criminal proceedings in the media, or the support of people’s deputies of Ukraine, socially known and recognized persons of our time. And more often a combination of these, for example, anti-terrorist operation veterans, political figures, that is, those who have an active citizenship and a high level of trust among citizens.

In fact, this is almost the only thing that has an effective influence and significance for the court in deciding on the choice of a preventive measure. Because in other cases, the presence of any of the indicated circumstances or their combination does not give a guarantee or the slightest certainty in choosing a milder restraint than detention.

Take as an example the last two high-profile events with the election of a preventive measure to the fifth President of Ukraine Poroshenko Petr Alekseevich and public figure Sternenko Sergey Vyacheslavovich. It is clear that it is difficult to compare them – the figures themselves are so different, their political and influential weight in society, financial opportunities and connections, the presence of their own media and even a parliamentary faction in parliament. But let`s try.

First of all, both events had wide media coverage. Defense of Petro Poroshenko was ahead of the curve and acted using offensive tactics. For example, in the premises of the GDB, during the announcement of suspicion to Petro Poroshenko. He, together with his supporting deputies of Ukraine and lawyers, went directly to the reception of the Office of the Prosecutor General of Ukraine. Where in the literal sense of the word “broke through” to the Prosecutor General of Ukraine. All the ups and downs of this struggle are currently unknown to us, but the defense was able to achieve a significant result. That the prosecutor’s office itself has changed the choice of a preventive measure to a softer one. And further supported the petition for the election of a preventive measure in the form of a personal obligation. Which is the mildest measure of restraint.

Taking into account the previous actions and official reports of the Office of the Prosecutor General of Ukraine, we can assume that Petro Poroshenko evaded and did not appear in the GDB for a certain time. At the same time, the Prosecutor General of Ukraine decided that there was every reason to change the application with the election of the mildest measure of restraint. I deliberately analyze in detail the work of lawyers – in both cases, it is represented by worthy specialists. Even if the author does not share the entire “set” of measures involved, that is, the personal opinion of the author.

Another thing is the election of a preventive measure to Sergei Sternenko. Despite the very serious support from the activists, the preventive measure that was chosen by the suspect is exactly the one on which the prosecutor’s office insisted. Namely round-the-clock arrest. If you take into account and analyze a series of events related to attacks on him. All the activities of Sergei Sternenko testifies that he is not socially dangerous. And the obligation of the state to ensure the safety of its life and health should be taken into account. When a person experiences a third time attack, when her life is a real threat – it is the law enforcement system that provides her protection. And this is also the first duty of the law enforcement system. But in this case, in my opinion, there are no objective reasons and due grounds for choosing such a preventive measure.

Of course, this should usually be a milder smell than detention. Therefore, round-the-clock house arrest in today’s conditions is not a reasonable and proper preventive measure. Taking into account the facts known to the general public, it is an inappropriate and proportionate preventive measure. Of course, there is also an appellate court and it can also change the decision of the court of first instance.

Because a person will not even be able to work and support himself. Because the investigation can last more than one year – there are quite a few such cases. But for us this example is interesting precisely because of its proportionality next to another.

In my opinion, it is the strength of social ties, the reputation of a person, his merits and the presence of achievements in society and in the country that are an extremely important and determining decision for choosing a preventive measure. Separately, I think it would be advisable to involve psychologists for conducting the appropriate research – for example, testing to determine if a person has the appropriate traits and habits of aggressive behavior. In order to obtain a conclusion, as additional evidence in favor of the fact that a person is not socially dangerous.

In less resonant cases, the prosecution does not neglect more “dirty” means.

Also from my own experience – one of the methods used by the investigator of the national police of Ukraine is the election of a preventive measure in the form of a pledge in a large amount. Counting on the fact that the suspect will not be able to find the funds necessary for making a pledge. Then, in connection with the non-fulfillment of the obligation to deposit funds for the bail, the suspect is initiated a preventive measure with detention.

Historically, the most frequently used measure of restraint in the form of detention. And therefore, it was he who for a long time was considered the most effective among the majority of the population. A relatively high level of corruption contributes to this. When people understand that a softer measure of restraint can be chosen for a bribe. So the election of detention for them confirms that the case has no corruption. At the same time, the conditions of detention in pre-trial detention centers are in most cases extremely poor. And the possibility of staying in more favorable conditions in a pre-trial detention center, also by itself, until recently, has been the subject of corruption.

And this is a legacy of past post-Soviet times. When the totalitarian regime aimed at unjustified persecution of citizens and their detention in prison.

The current Code of Criminal Procedure of Ukraine provides for preventive measures in the form of:

The application of an expanded number of types of measures in connection with the adoption of the Code of Criminal Procedure of Ukraine did not immediately take root. And at present, the most common are detention, first place. But as an achievement can be considered, then in second place is the very election of such a preventive measure as house arrest. Third place is personal commitment. The security as such, while generally applied in comparison with other measures hundreds of times less.

Summing up, I wish you not to check the effectiveness of our law enforcement system. And indeed the criminal process is precisely competitive. The result will depend only on you, your family, friends and relatives, the qualifications and experience of your lawyer. And yet, Praemonitus Praemunitus – warned – means armed! Already become more socially active, develop social ties, do good deeds for society and society! You never know when it comes in handy. And as they say good deeds do not remain in vain!

The statistical data was used by me from the following source https://socialdata.org.ua/statistichniy-analiz-zastosuvannya-su/