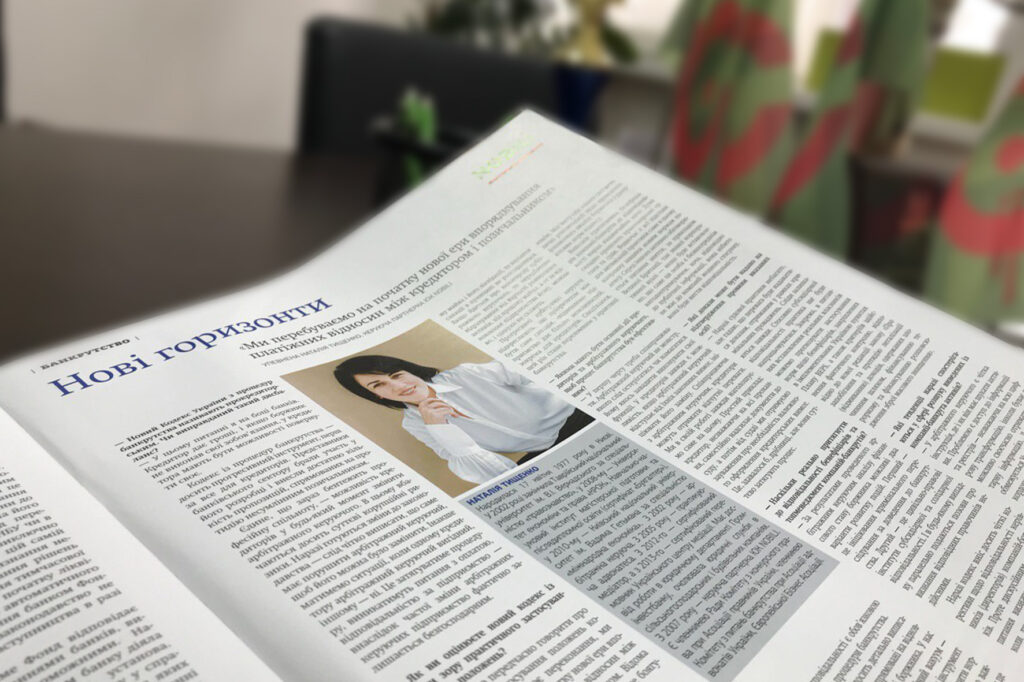 -The new code of bankruptcy procedures is called pro-creditor. Is such an imbalance justified?

-In this matter, I am on the side of banks. The creditor gives the money, and if the debtor has not fulfilled his obligations, the creditor must be able to repay his.
The Bankruptcy Code is a fairly progressive tool, especially for creditors. Representatives of the banking sector participated in its development and made a sufficient number of proposals aimed at counteracting unscrupulous borrowers.
The only thing that confuses the professional community now is the possibility for creditors to change the arbitration trustee at any time. There are quite significant corruption risks in this. Legislative changes are currently being prepared – it should be clearly stated what exactly the arbitration trustee must violate so that he can be replaced. Otherwise, we will have situations where one creditor benefits from the arbitration manager, another – not. This will delay the procedure, there will be issues with payment, responsibility for the company – due to the frequent change of arbitration managers, the company is virtually unmanaged.

-How do you assess the new code in terms of practical application of its provisions?

-So far it is premature to talk about the practice of applying the provisions of the code, but, in my opinion, we are at the beginning of a new era of streamlining the payment relationship between lender and borrower. The famous phrase “forests are returned only by cowards” is a thing of the past.

-What are the most important changes for the participation of participants in bankruptcy proceedings?

-Among the provisions that help both banks and arbitration trustees, it should be noted the simplification of the transfer of collateral on the balance of the secured creditor after the expiration of the 170-day moratorium. This significantly simplifies and speeds up the bankruptcy procedure, as well as reduces costs.
The norm is actively used, which allows the arbitration trustee to protest and declare illegal the debtor’s transactions for the three years preceding the bankruptcy (previously, a similar opportunity was limited to one year). In addition, there is the possibility of bringing beneficiaries and top management to subsidiary or joint and several liability, and the courts are of the opinion that a lawsuit to bring a manager to justice is a prerequisite for closing the bankruptcy proceedings.
The Code also sets out in sufficient detail the reorganization procedures aimed at restoring the debtor’s solvency. We have an information vacuum in this matter – everyone is talking about bankruptcy as a tool to terminate a legal entity, but to restore the normal operation of the enterprise is much more important. Unfortunately, not all lenders are aware of this.
The Code is generally aimed at increasing the level of satisfaction of creditors’ claims and providing guarantees for investors in the process of recovery. Much depends on the arbitration manager – if he comes to the company only for the purpose of selling the property and its liquidation, the options for reorganization are not considered in principle. If we are talking about the remuneration of the arbitral trustee, then there is a deduction from the value of the assets sought, from the sale of property, but for the restoration of the company he may not be “thank you”.
Progressive arbitration managers emphasize that the priority should be rehabilitation, the “restored” company provides more opportunities, in particular for creditors. I hope this year will be a turning point in the practice of bankruptcy.

-What should be the main actions of creditors and the arbitration trustee for the bankruptcy process to be effective?

-First of all it is necessary to cooperate. An arbitration trustee is not a monster to beware of or try to interfere with. Creditors always have the opportunity, if the arbitral trustee deviates from their legal requirements, to initiate his replacement. By working with an arbitration trustee, creditors can reap tangible benefits. We always emphasize this in our work. A simple example: the creditor, despite all requests, sends the documents to the court, and then we receive a remark from the judge about the need for proper execution of creditors’ claims. These seem to be trifles, but they significantly delay the process.

You can read the full version of the magazine on the Financial club website: https://finclub.net/ua/