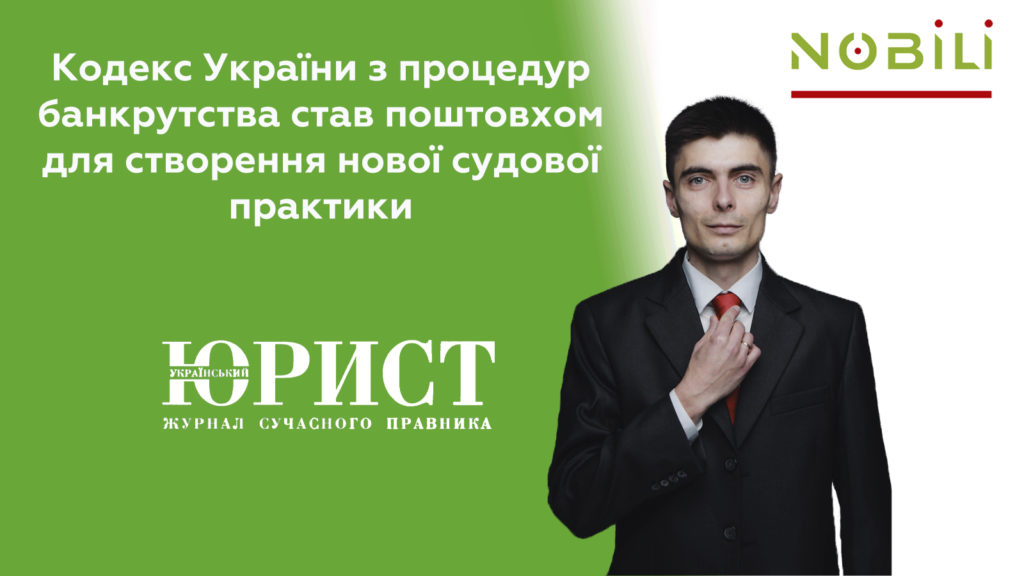 OPENING OF THE PROCEEDINGS

If earlier the Law of Ukraine “On Restoration of Debtor’s Solvency or Recognition of Debtor’s Bankruptcy” allowed recovery of a natural person – entrepreneur, the Code combines a natural person – entrepreneur and a natural person into one category of debtors.
Proceedings in the case of insolvency of an individual may be opened only at the request of the debtor and in the presence of appropriate grounds indicating the insolvency or its threat.
In the application for the opening of proceedings, the individual must indicate the following: the name of the commercial court; first name, first name, patronymic, contact details; state the circumstances that became the basis for the appeal to the court, and indicate the list of documents that are attached to the application.
When preparing an application, it should also be borne in mind that such a statement must meet the requirements of the Commercial Procedure Code of Ukraine.
The individual must attach the following documents to his / her insolvency statement:
1. A document confirming the presence (absence) of the status of a natural person – entrepreneur.
2. Specified list of creditors and debtors.
3. Own description of the property belonging to the right of ownership and copies of the documents confirming the right of ownership.
4. The list of property that is pledged (mortgaged) or is encumbered in another way.
5. Copies of documents on transactions made (during the year) in respect of real estate belonging to him, securities, shares in the authorized capital, vehicles.
6. Copies of all agreements in the amount of not less than thirty times the minimum wage.
7. Information on all available accounts (including deposit accounts) opened with banks and other financial institutions in Ukraine and abroad.
8. A copy of the employment record book (if available) and information about the employer (employers).
9. Declaration of property status. The declaration is submitted for the three years (for each year separately) preceding the submission of the application to the court. The declaration must contain information on the property, income and expenses of the individual and his family members in excess of thirty times the minimum wage.
10. Evidence (receipt, payment order) of the advance to the deposit account of the court remuneration to the restructuring manager for three months of performance of duties.
11. Information (certificate) on the presence (absence) of outstanding convictions for economic crimes.
12. Power of attorney or other document certifying the authority of the representative, if there is a representative.
At the same time as the application for the opening of proceedings, the individual is obliged to submit proposals for debt restructuring.

After filing a declaration of insolvency of an individual to the commercial court, such a court actually begins its consideration. If there are no grounds for refusing to accept the application or returning such an application, the court shall, no later than five days from the date of receipt of the application, issue a decision to accept the application for consideration, appoint a preparatory hearing.
At the same time, you should be prepared for the fact that the court has the right to decide on the obligation of an individual to provide additional information and take measures to ensure creditors’ claims: prohibition to enter into transactions, obligation to transfer property for safekeeping actions, seizure of property and a ban on travel abroad.
In the preparatory session, the commercial court considers the submitted documents, finds out the grounds for initiating insolvency proceedings, as well as resolves other issues.
As a result of the preparatory hearing, the court decides to open proceedings or to refuse to open insolvency proceedings (the debtor has fulfilled his obligations or has been brought to administrative or criminal responsibility for actions related to insolvency).
In the case of opening proceedings, the court introduces a procedure for restructuring the debts of an individual, a moratorium on satisfaction of creditors’ claims for a period of 120 days and appoints a restructuring manager.

Debt repayment of debts is the last court procedure in the case, which is used to satisfy creditors’ claims through the sale of property of an individual.
Notice of the debtor’s bankruptcy and the introduction of the debtor’s debt repayment procedure is published on the official web portal of the judiciary of Ukraine.
The manager of the sale of property together with the debtor conducts an inventory of the property and determines its value. The debtor’s property, which is subject to sale in the procedure of debt repayment of the debtor, is the liquidation estate.
The liquidation estate includes all the debtor’s property owned by him, except:
1. Dwelling, which is the only place of residence of the debtor’s family (apartment with a total area of ​​not more than 60 m2 or living area of ​​not more than 13.65 m2 for each family member or a house with a total area of ​​not more than 120 m2) and is not the subject of collateral.
2. Funds held in the debtor’s accounts in pension funds and social insurance funds.
3. Other property, which according to the law cannot be levied.
The court also has the right at the reasoned request of the debtor and other participants in the proceedings to exclude from the liquidation estate of the debtor: if the property is necessary to meet the urgent needs of the debtor or his family members; illiquid assets worth no more than ten times the minimum wage or income from the sale of which will not significantly affect the satisfaction of creditors’ claims.
The total value of the debtor’s property, which is excluded from the liquidation estate, may not exceed thirty times the minimum wage.
All property that is included in the liquidation estate is subject to sale, and the proceeds from such sale are deposited in a separate bank account, from which the satisfaction of creditors’ claims. Creditors ‘claims included in the register of creditors’ claims are satisfied in the following order:
1. In the first place, the requirements for the payment of alimony, compensation for damage caused by injury, other damage to health or death of an individual, payment of insurance premiums for compulsory state pension and other social insurance are met.
2. In the second place, the requirements for the payment of taxes and fees (mandatory payments) are met and settlements are made with other creditors.
3. Penalties (fine, penalty) are paid in the third place.
The requirements of each subsequent turn are satisfied at the expense of funds from the sale of the debtor’s property after full satisfaction of the requirements of the previous turn. In case of insufficiency of the means received from sale of property of the bankrupt, for full satisfaction of all requirements of one turn claims are satisfied in proportion to the sum of the claims belonging to each creditor of one turn.
Creditors’ claims on the debtor’s obligations secured by the pledge of the property of an individual are satisfied at the expense of such property. Claims that are not satisfied due to the insufficiency of the debtor’s property are considered repaid.
Upon completion of the debt repayment procedure, the commercial court, ruling on the closure of insolvency proceedings, decides to release the debtor – an individual from debt.
Having got rid of all debts, the individual should not forget that he bears reputational losses, namely:
1. Insolvency proceedings on an insolvency application may not be instituted within five years after the individual has been declared bankrupt.
2. Within five years after a natural person has been declared bankrupt, such person shall be obliged to notify the fact of his / her insolvency before concluding loan and credit agreements.
3. Within three years after a natural person has been declared bankrupt, he or she may not be considered to have an impeccable business reputation.