Vyacheslav Zoma Head of the practice of criminal procedure

and business protection of 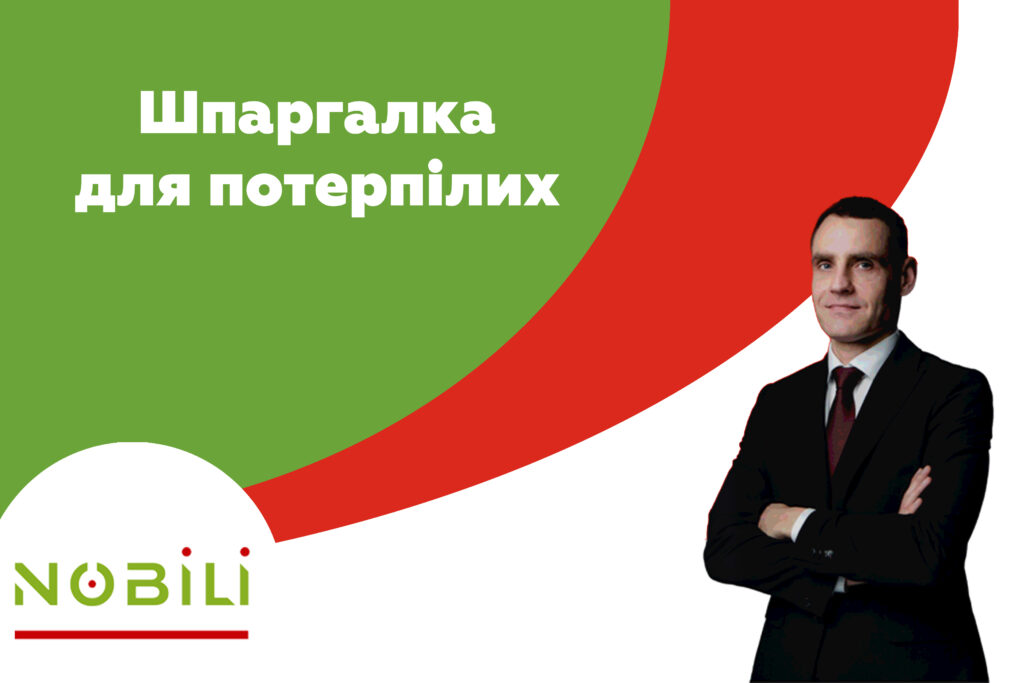 This article is about how to act if a crime has been committed against you. That is, you are a victim of crime. I sincerely wish that this did not happen. But as the ancient Romans said – warned – means armed.

According to Article 55 of the Criminal Procedure Code of Ukraine, the victim in our case is a natural person who has suffered moral, physical or property damage as a result of a criminal offense. We do not consider cases when the victim is a legal entity in this article.

In simple terms, crimes against life and health are the infliction of bodily harm of varying severity. For example, when a fight has taken place, or even a single blow has been inflicted, bodily injuries have already been inflicted, and criminal liability is provided for this.

Crimes against property – intentional actions as a result of which a person is deprived of property. That is, when something was stolen from a person, fraudulently taken out of his pocket, taken out of his house, snatched from his hands, robbed and misappropriated. As a result, they were deprived of ownership of a certain thing.

What you need to pay attention to and how to act if a crime has been committed against you. Or just getting ready? The tips are as follows:

The main thing is to clearly understand the priorities. If a crime is committed against you, the main thing is your life and health. Therefore, during an attack, if you are not specially prepared to resist the attack and do not have weapons. Or when you have a weapon, but do not know how to use it – it is better to run fast. As Sun Tzu said, it was the best battle ever. At what it is necessary to run towards crowded places, and it is necessary to shout very loudly for the help. To attract attention. The main thing is that as many people as possible hear you – one of them can help or at least call the police.

If you see suspicious people following you. They try to enter the entrance together, huddle in your vehicle – do not wait when you are attacked or your property is stolen. Contact the nearest police officer on the street, the military – any person who inspires confidence. Explain what is scaring you, who is persecuting you. Don’t be afraid to sound ridiculous or eccentric. Better a poor horse than no horse at all. Sun Tzu’s treatise The Art of War contains the Rule of War. Which is not to rely on the fact that the enemy will not come. And rely on what I can meet him. Do not rely on the fact that he will not attack, but rely on the fact that I will make it impossible for him to attack himself.

If the attack is unavoidable – defend yourself, use weapons and foreign objects. It is better to defend yourself in court than to die in an attack. Address passers-by, there are no restrictions in these cases. Criminal liability is excluded in case of necessary defense, extreme necessity.

Part 2 of Article 36 of the Criminal Code of Ukraine establishes that every person has the right to necessary defense, regardless of the possibility to avoid socially dangerous encroachment or to seek help from other persons or authorities.

Necessary defense is not a very simple and clear concept, due to the lack of clear case law and a rather complex structure of simultaneous compliance with several conditions such as the need and sufficiency of damage, the presence of a threat – ie the state of self-defense and so on.

According to the definition of the term – necessary defense is considered acts committed to protect the legally protected rights and interests of the protected person or another person, as well as public interests and the interests of the state from socially dangerous encroachment by causing harm to the offender, necessary and sufficient in this situation to immediately prevent or stop the encroachment, if it was not allowed to exceed the limits of self-defense.

Extreme necessity is the forced infliction of harm to law enforcement interests in order to eliminate the imminent danger, if in this situation it could not be eliminated by other means and if the damage is equivalent or less significant than the harm averted.

Currently, the issue of self-defense is very relevant in the context of the case of well-known activist Serhiy Sternenko. It is necessary to devote a separate article to this, so we will only outline certain limits of necessary defense. But remember the main thing – exceeding the limits of self-defense, although it provides for criminal liability, but only in the case of significant injuries – more severe than moderate injuries. The same applies to the case of inflicting bodily harm on an offender during detention. If it is simpler, for the broken nose of the attacker there will be no criminal liability for the victim. Both in the case of protection and in the case of his detention. The same applies to passers-by who detain the attacker. However, be careful, because self-defense is absent when injuries are inflicted for revenge or not for detention.

If a crime is committed against you, call the police. And an ambulance if you or others are injured. This is necessary, firstly, in order to maintain health, and secondly, to record the presence of injuries. Because in the future it will be proof that you have these injuries.

The following recommended steps are before the police arrive:

– establish and record telephone numbers and personal data of people who are witnesses of the crime, or saw the offender, the vehicle in which he drove, his number and other details;

– find out the presence of video cameras on neighboring buildings and structures, agree with the owners of this equipment on the storage of these videos;

In the future, all these things, and fixation can be evidence during the investigation of the case and play a crucial role in a positive decision of your case.

All these circumstances of the incident must be reported to the police in writing both during the preparation of the explanation and during the interrogation as a victim. They must accept from you a statement about the commission of a crime against you or a protocol for accepting an oral statement about the crime and all available evidence.

The following article will continue the sequence of actions during the appeal independently with the statement on commission of a crime to regional department and the further interaction with the investigator.

Of course, these tips are not a universal algorithm for all possible actions and cases, but it, I hope if necessary, will be useful to you.